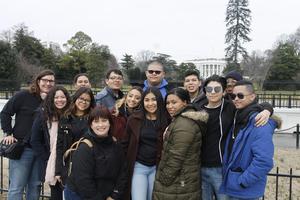 Congratulations to the Junior State of America (JSA) on another successful trip to Washington, DC over the Winter Break.  Under the guidance of Jeanne Baridon with the advisement from Sofia Karanikolos and Patrick Oriani.  Thirteen students represented various bills which before Congress in attempts to become a law.  Claudette Miranda and Awni Pimental were members of the House where they created a bill to make public works of art ineligible as evidence in a court of law.  Awni Pimental won BEST SPEAKER for this debate out of 1,200 students from all around the Union States, including Puerto Rico.
SENATE:
Claudet Miranda
Rachel Perez
REPRESENTATIVES: